Don't like just sitting around a table chatting when you go out? Well, I have some good news for you: there's no better way to have fun than by enjoying a bar game alongside your beer.

Whether you're hanging out with friends or on a date, bar games are great for breaking the ice, encouraging conversation, and just having some fun (without the awkwardness).

Most of us have played some sort of bar game in our life—probably one that involved spinning a bottle or shooting darts into a corkboard. But what are the best bar games for adults? What's worth playing at your next outing to the local watering hole?

Here are some of my favorite bar games for adults. 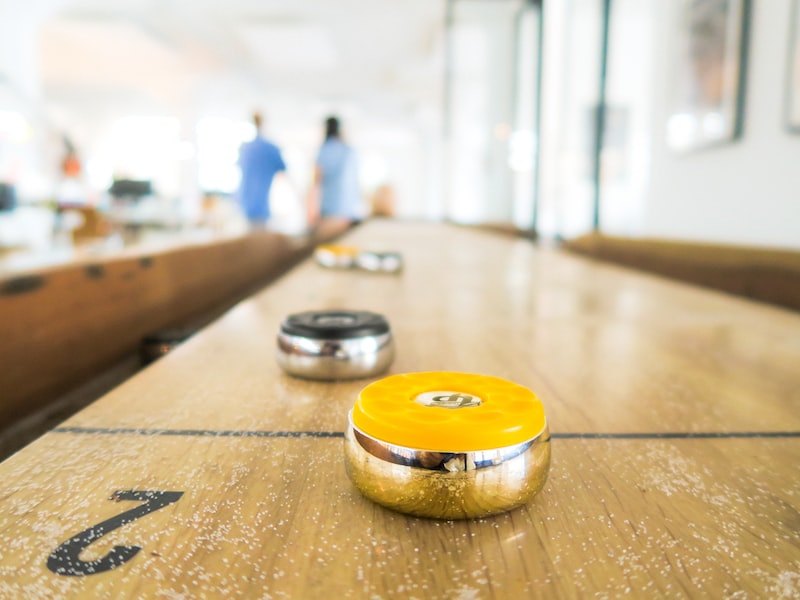 Shuffleboard is a classic bar game, and it's so much fun. Not only is it super easy to learn but you can also play with a group of different ages—it's perfect whether your friends are in their 20s or 80s.

The basic idea is that you push a puck down the board towards the end, trying to get it closest to the end without overshooting. It's a game of careful precision—and even if you push your puck with the perfect skill, there's always that sneaky chance that someone else might bump into it and knock it off!

Shuffleboard tables are not small, so you'll need to find a local bar that is big enough to accommodate one. But once you find one, you'll see why shuffleboard is such a classic bar game for adults.

For the soccer fans out there, foosball is a fast-paced bar game for adults to challenge their coordination and mental agility, and get the adrenaline pumping. A cross between table hockey and soccer, it's actually still a fun game whether you're into sports or not.

Foosball is really more of an all-around fun activity than a typical "bar game," but let's not split hairs here. There's something about making the perfect shot with the little players that's just delightful.

As a game for just two players, it's also a great option to play with a date—as long as getting a little competitive won't ruin the vibe! 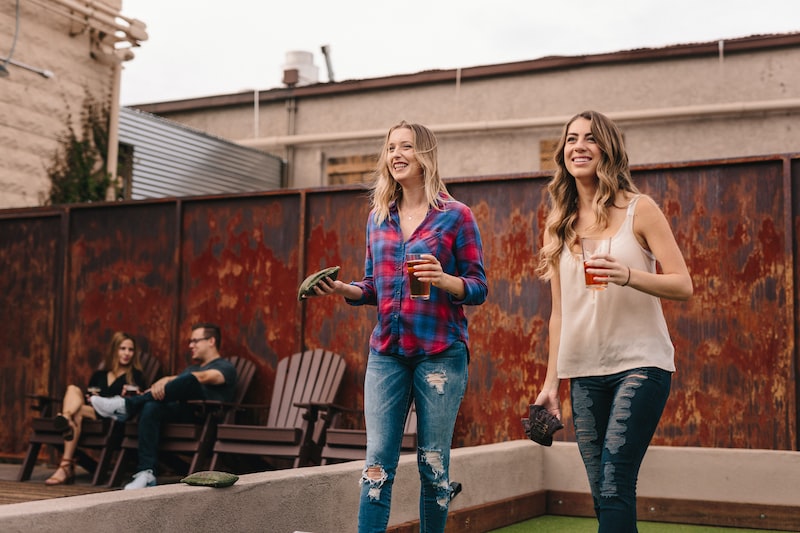 Cornhole is a turn-based bar game that you can play with a small group. It's also great for larger groups because not just two people can play—there are often several boards and you can always form teams of multiple people.

All you need is the board (basically an angled wooden surface with a hole in it), some beanbags, and some friends to play against. Each team takes turns to throw their bag at the board from a distance—the goal is to get the bean bag into the hole.

You can also make things interesting by adding a drinking game twist: for every time your team scores, everyone on the opposite team has to take a drink!

This is a cool bar game because it requires both physical skill and in-the-moment thinking. It's also one of my favorite bar games for adults because you can play with larger groups, making it perfect for parties.

It’s perfect for beginners who want to get in on the action without having to learn complicated rules or strategies beforehand. Plus, there’s always excitement when someone pulls out another piece from the stack and everyone gets super competitive.

Jenga always gets more challenging if people are drinking though—that’s when coordination gets scarce and the game is usually over quicker! 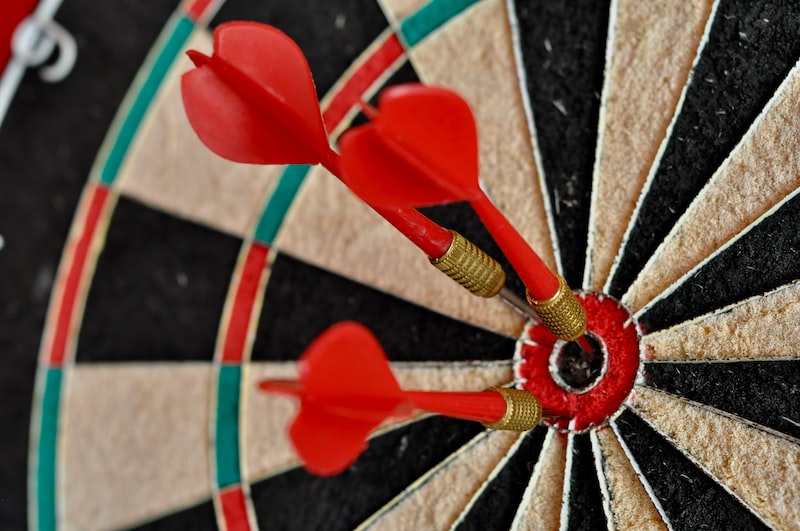 You either love darts or you hate it. There's truly no in-between, but if you're willing to give it a chance, it can be a very enjoyable bar game for adults.

There's definitely skill involved here, but it's also pretty easy for beginners to have a great time. Even if you don't hit the bullseye every time, it's still super fun to throw the darts and watch yourself get better—even if your goal at first is just to hit the board at all.

There are some complicated strategies to getting your score as high as possible, but this is also a great game for playing with friends when none of you know what you're doing. You can make it more about having fun together than scoring points.

This may be one of my favorite bar games for adults—especially if you're on the lookout for an activity to play with your relatives or grandparents too. I can't tell you how many times I've joined my family at trivia night and stayed until the end even though I totally bombed most of the questions.

It's just so much fun, and there's zero physical skill involved! You can play with a small group or as part of a larger team, but it can also be super entertaining just watching everyone else try to answer questions.

Because you're also learning new information, you'll find yourself in a whole new realm of interesting facts—which can feel pretty awesome when you're picking up something new about science, sports, or history. 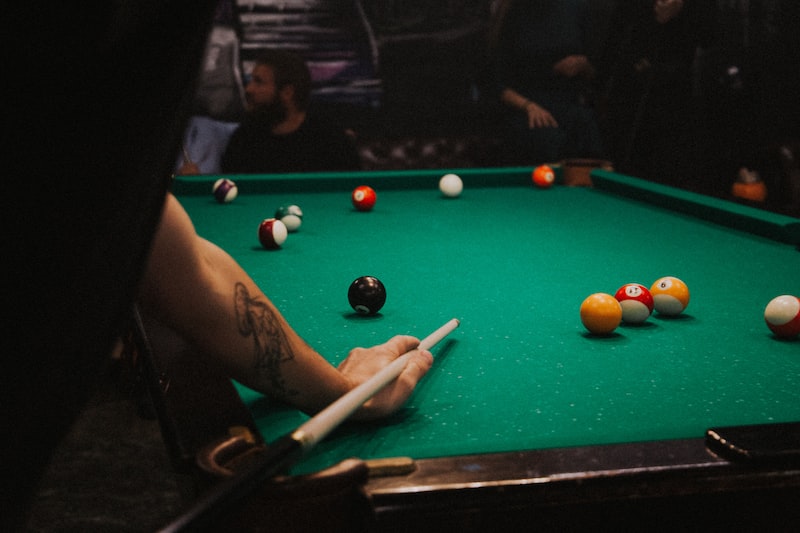 Another classic, pool is the perfect bar game for adults to play in pairs. If you're in a larger group, you can either have a winner-stays-on or play in teams.

It's a popular bar game for adults because it truly does require some skill to become good at playing, but it can also be super fun even if you're just learning the basics and don't have much coordination.

Just try to make sure that your opponent is a similar skill level—it can be super frustrating to play against someone who keeps sinking every shot when you can't even get one in!

Another non-physical bar game for adults, Cards Against Humanity is a fun game to play with a small group of your closest friends. Like trivia, it doesn't require a large space as you can simply bring the game to the bar with you.

It's not that complicated to learn how to play—it's basically like Apples to Apples but with super blunt and offensive answers. Definitely one for the adults only!

Cards Against Humanity is definitely not for everyone, but it can be a lot of fun to laugh together about all the things you come up with. Not only will this game help you have fun in the moment; it'll give you something lighthearted to talk about later.

Bar games are a great way to spend time with friends and have fun without breaking the bank. These popular bar games for adults can be played casually or competitively depending on what you're in the mood for, but they all come with one thing in common: they are great social icebreakers!

Whether you want something lighthearted like Cards Against Humanity or more complicated like darts or pool, there's bound to be a game that suits your taste. See if your local bar offers any of these fun bar games for adults!